So I sit in a hotel lobby on Lake Van watching Trabzon play Kaysei along with all the other fans in this hotel who are all men. It's just exactly like home here--except that at the Davenport people don't jump up at dinner and spontaneously break into folk dances along the buffet table; the breakfast rooms in the hotels in Sandpoint and Coeur d'Alene don't serve scrumptious white cheese and honey sprinkled with walnuts; and instead of the Canadian border, it's the Iraqi and the Irani border that are just down the road with the Armenian border flanking us at the moment.
One year ago when I was here, I was traveling with a Cuban couple from Florida. We would stumble around one set of ruins or another, or some utterly astounding feature of nature or another cave or mosque and get back on the bus and slap our jaws in utter astonishment. We gravitated to each other because while most on this tour developed a saturation for the art, the archeology, the architecture and the history and the occupation that is Turkey, we never did. We continued to be utterly gobsmacked at every turn and would reboard the bus, involuntarily slaw our jaw and whisper to each other "Did you ever?" I loved the Cubans and they loved me because I look like their daughter and because our passion was synced and simul-tuned. Our eyes would meet and widen two dozen times a day.
So they've become part of me as many people do and I think of them at least once an hour now. Because of course, at least once an hour, I have another Cuban moment. 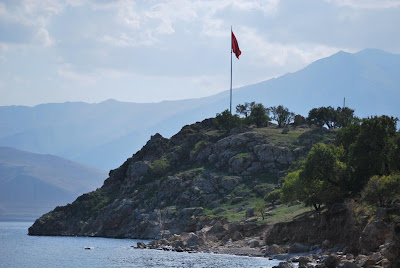 JBelle
On Assignment
Van, Turkey
Posted by JBelle at 11:39 AM No comments: 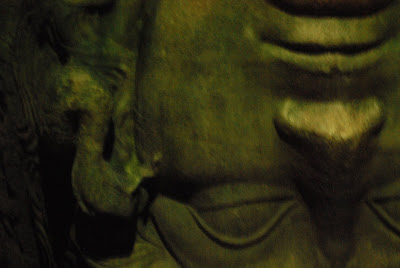 That's Medea. Holding up one of the pillars in the Basillica Cistern. It's only one of a million faces that I've seen in the few days and one of a hundred million faces that have passed through this part of the earth throughout time. Only the most famous names of history have come through here, their ambition hard at work and their thirst for greater conquest and curiosity over the exquotic compelling them to come to Antioch.

It's hot; pungent; and the people play by a set of rules curious in their contradictions. St. Paul set about on a journey that would become the defining moment of one of the most remarkable careers in all of history here in Antioch. We walked a half mile though the debris of a rock slide that sent an entire community tumbling down the side of a mountain to an elaborate burial complex, carved into the rock, extraordinary in its design and exquisite in its decorative motifs. It was built sometime after 1 AD but before 5 AD. What kind of tools existed in 1 AD that would allow you to build a small funerary city in the side of a rock mountain?

The children frolic with abandon, their strong wills clearly at play and their lust plainly showing, even at young ages. Last night there was a wedding in the hotel and as we peeked in the doorway, we were scooped into the joyous melee of the happy event, dancing wildly in the middle of the dance floor in an IDAHO t shirt with people who loved and embraced us and would never see us again. Many, many children, along with old men, danced as well and spared no effort in their celebration of the moment.

You get the feeling that because everyone is just passing through, they all have decided to take the night off, kick back and explore the opportunities present. Some may even stay awhile.

So it's been quite a summer. All kinds of challenges and change ups. People at my house at 7 am banging and sawing and people at my house at 10 pm banging and sawing. And all people happy and engaged in having work and something to think about. Met all kinds of competent, caring people who have the time in down times to render excellent customer service, really truly excellent customer service, and as the projects upstairs at Bellemaison come to a close, I find myself drawing up a list for thank you notes. A first in my life.

I used to get up really early and get the paper off the front porch in Coeur d'Alene, all frosty and cold. Lot of paper readers in our house growing up and if I wanted to be the first, I had to get up early to beat all those people I lived with, all greedy for the morning news. Like me, they loved the newspaper. Unlike me, they all knew how to read. So it started out for me as instructional and only became a love affair later, reading the paper did. I'd steal into the only bathroom in our house, shut the door and sit on the floor by the heat register where it was warm and quiet. I would unfold the paper, lay it across my knees and nail the headlines; then get into the gritty business of the five and eight paragraph news articles, probably written by some man as he smoked at his desk. I learned about Cesar Chavez this way; about The Civil Rights Act and about something that was uber incredible to the world but that I didn't quite understand, something they called Sputnik. It was one of the richest educational experiences of my life, the early morning quiet and the bathroom at 918 Penn.

My Grandma Belle, yes she was a real person, gave me a bible for my birthday after I started school. I loved this bible as it had a pleasing cover and was unlike any other at Sunday School at the First Presbyterian Church at Sixth and Lakeside. I suppose you could say, with a certain authority, that it was tres chic. Yes, it was definitely tres chic, my starter bible. The thing was, I loved to read that, too. I devoured it. Read those stories over and over; first, read 'em until I could read them. I do not think it's a random thing that I have had a quiet affair with poetry my entire life, starting out reading the King James Version of the Holy Bible as a young child. Tough going. But I licked it with time and read all the stories of the Old Testament with relish and and passion, skipping along with the rhythm and grace until I was rowing hard with strength and ardor through the stories of family, separation, pilgrimage, seduction, triumph, betrayal and despair. I learned to read reading the newspaper and the bible, studying the stories of Genesis like a little research scientist, furious with analytical; much like I would later in life with The Godfather movies and with the books of James Michener, Edward Rutherford, and Jean Auel. I just loved this stuff.

And now, as it turns out, I am going to Upper Mesopotamia and to the valleys of the Tigris and Euphrates Rivers, where many of those exquisite stories, the tales and travails of Genesis, were set. To be truthful, I realize only now that I have held the setting of some of civilization's most celebrated stories in an academic understanding; you'd have to say that for me the settings were co-equals with the settings of some of Grimm's Fairy Tales, like the deep, dark forests and castles of Northern Europe. I loved all literature and all stories from a very, very young age and made distinctions only between what was a really, really good story and what left me flat-footed and empty-handed at the end.

But, I will now go to where they excavate the Garden of Eden. I will stand at the base of Mount Ararat. I will look south over the vast Mesopotamian plain at sunset and walk the streets of Antioch, where Paul first set out to do a life's work. It's a major, major paradigm shift for me of the most fundamental nature. I am going, back I guess, to walk the revelations and stories of my childhood. Imagine being able to do that...


Last night I had a dream where there was a small party of some kind going on at Bellemaison; someone came at me, screaming, "Jon! won't wake up!"

I ran to my adult youngest child in a nano-second, where he lay sleeping in my place on the couch. I called to him, loudly, and he didn't respond. I knelt and held his shoulders and gently shook him and his vacant, sleep face remained. His arms flopped at me and his powerful hands smacked his thigh. I was terrorized and feel the paralysis of the moment even now. I screamed for someone to get a car ready and picked him up into my arms, all of his adult male self, and he was only slightly heavy. I could do it. I carried him through the garage and down the driveway. I got into an SUV and we took off at high speed for Sacred Heart. I kept shaking him and saying, Jon. Jon. Come back to me. Come back. To no avail. He lay in my arms. I began to sing to him, what I always sing, This is my Father's World... and thought, I. cannot.walk.one.more.person.to.Paradise. and certainly not him. He cannot be going to Paradise. I looked up from him, out the window, hoping to see the sky for some kind of a clue and at that moment, he woke up. Woke up like he'd just had the most delicious nap. He is my child that would come to me, lay his head in my lap and say, wow, Mom! I slept like the dead. He'd then stand up and stretch and go off in search of cereal. I loved that little kid...

I said Jon? He said, groggy but sated, I have been sleeping. I said I know. You scared me. He said just sleepin'. I'm here now. Patted my forearms with his again powerful hands. Closed his eyes and did a little stretch. And lay in my arms as we meandered all the way down Rockwood, winding through the trees and with the gauzy blue sky out the window next to us. We moved at a very lazy pace now. He chatted sleepily.

I can't remember what he talked about. 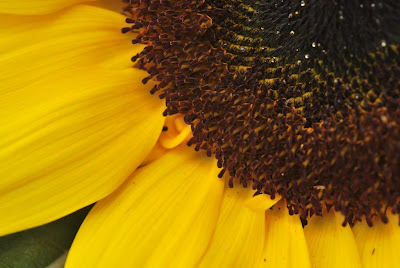 I am so, so drunk today;
I've escaped my bonds today.

I'm that "something" that doesn't occur to the mind;
I'm that; yes, I'm that, today.

Spiritually, I went up to The Heaven of The Soul,
even though in form, I'm down today.

I pulled on The Intellect's ear and said: "Intellect!
Be gone! Because of you, I got free today!

"Take your hands off me, O mind!
I'm crazy as a Magnum today."

That beautiful Joseph handed me an orange to peel.
Bewitched by His Beauty, I cut both my hands today.

That brimful Jug of Wine made me so drunk
that I broke to pieces so many earthen vats today.

I don't know where I am,
but what a happy place I'm in today!

Fortune came to my door to flirt today,
but, drunk, I slammed the door in her face.

But when she left, I ran after her;
I haven't stopped running for a moment today.

When We are nearer than the jugular vein*
became clear today, I could no longer adore myself.

Do not tie up those ringlets of yours, Sham of Tabriz!
I'm caught like a fish in this net today.