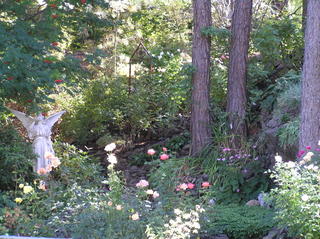 I was out talking to the Chows this morning and we've decided to make an exception to the rule. We like the Grandma Jo rule, where talking about politics, sex or religion is just not nice, unless of course, you are talking about the One Holy Catholic and Apostolic Church or the beloved Holy Father, in which case all bets are off and blessings are on. Anyway, we happened to see a piece in the newspaper when we were in Noo York Citty last and we think it's worth bringing up here, mostly because it originated in Montana. And so we don't think Grandma Jo would mind at all.

Seems some of the good people of The Big Sky want their governmental officials to contact the Feds and give them back some of the pork obtained in the last congressional slaughter. Serious. Montana, number 25 in ranking on the highway-pork roster (Chows assume this is a hybrid probably genetically engineered at IDAHO as they have never seen the 4-H kids at the fair with road pigs?), got $4 million for a parking garage in Bozeman. Folks there don't want the money, nor the garage apparently, and instead, want the city to give the money to Katrina relief. Now this $4 million garage was but one item on the $286 billion highway bill. Abby Wisse Schachter of The New York Post wonders what 'highway' projects all the people of New York (who came in #4 on the pork list, which reconfused everyone about who the real porker is--Hilliary or entire federal budget process) might throw in, following The Big Sky's big example.

...$500,000 for renovation of streets, sidewalks and curbs outside The Metropolitan Museum of Art?
...$2 million to enhance the Battery Park Bikeway perimeter?
...$2 million to contract West 79th Street rotunda?
...$3.2 million for walkways and bikeways in Coney Island?
...$8.25 million to study, design and contruct Brooklyn Waterfront Greenway in Red Hook, Greenpoint and the Navy yard in Brooklyn?
...$10 for a parking garage at Harlem Hospital?

The Chows got really worked up when they read the rest of the list:

Pete says that Hilliary Clinton has totally ignored Club Chow at Bellemaison and that he wants to speak to her immediately about congestion mitigation at the breakfast dishes. Red Dorothy says she could provide a deer avoidance system to the good folks of Weedsport like the one she has going at Bellemaison for far less. And Silvie Ruth says this whole bike path thing has gotten completely out of hand but as it seems to be the shizzie, she's gonna ask Hilliary for the kind that Coney Island got. We don't call her Laura Lunchmouth for nothing. Cleo just sighed and said, It could probably be shown by facts and figures that there is no distinctly American criminal class except Congress. 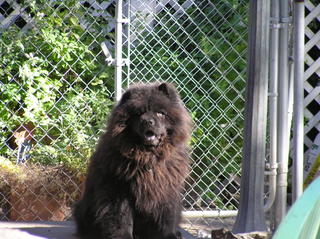 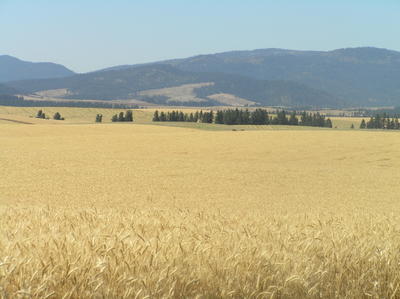 I retook The Test of The Palouse this afternoon and this time, I passed. I first reported here about this grueling exercise and my psychological failure on July 31. This time, from the moment I set out I told myself I was going to ride all the way and not give in to the pain. Good thing, too, because I needed the resolve. It was easy for me to see why I couldn't get it the first time. It in not only the steepest part of the 10 mile all-hill course, but the ramp up to it is very tricky, making a cross across two curvey parts of the Palouse Highway. (Can the cars see me as I am about to cross here? Am I going to be roadkill in the next 7 seconds?) But the daunted Waneta Hill is an unknown no more. I did it. It was nip and tuck all the way but I made it to the mailbox at the top of the hill and didn't start to spit up blood until a few hundred yards later. r.r.r. Upward and onward. What's next. 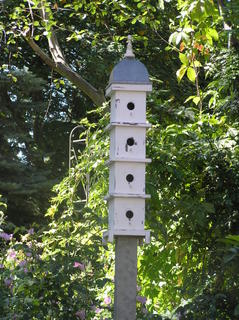 Turns out there was a major fight going on in Bellemaison this morning. Seems, fittingly, that property rights was the issue. Four different birds were trying to get in on the ground floor of the new vertical condo recently installed in the perennial garden. Problem is, that particular unit is a single-family dwelling. These birds got after each other like Mormon women at the Nordstom Anniversary Sale! whooo-wheeee! Cleo maintained a Swiss-like neutral stance, ready to serve the UN in monitoring and peacekeeping missions, if called upon. Red Dorothy however, said she'd be happy to get in there and settle the squabble because all that screeching and pecking was disturbing her concentration as the opening day of the fall Ball schedule unfolded.

Like being with all good New Yorkers, there were many strong opinions in the air but what beautiful air it was today, like all good EWA days in the fall. 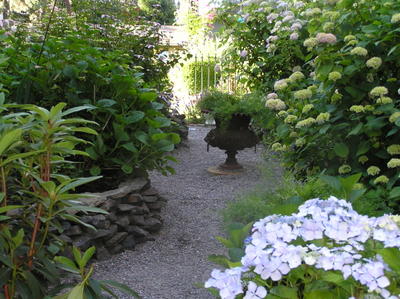 Only in The 'Kan! A guy wins the lotto and reports that he will cash his check and embark upon a tour of really great gardens. Then he will come home and buy 10 pick up loads of worm castings for his own garden. THIS my friends, is why The 'Kan EWA is our home and its people are our people. 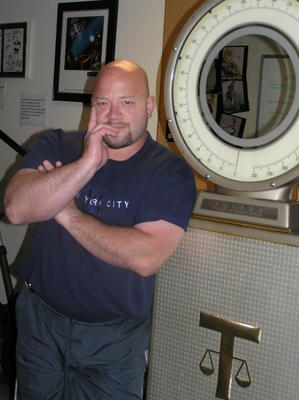 Dr. Mengele has spoken. Says he, "If you want to move that huge ass of yours around the course of The Portland Marathon, you need to do some more serious training." Dr. Mengele, as evidenced from his picture, is a dainty and demure man.

And so the sweat and the sour clothes in the Kate Spade carry-all will form a crescendo that will climax, with any luck, on Sunday, October 9, 2005 in Portland, Oregon. Stay tuned. 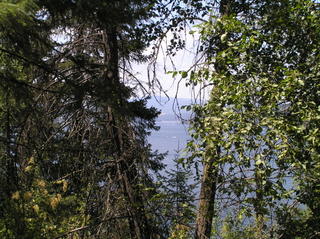 It was an exquisite summer day at Lake Coeur d'Alene today. Now that my personal GPS system is not calibrated by the school year calendar, it was not the last day of summer but another day of a beautiful, hot idyllic summer that we here in The 'Kan bear as a personal entitlement. I would give just about anything to adequately describe the blue of the water, the delicate haze of the hills, the luscious warmth of the sun and the comings and goings of the dragonflies and butterflies that merrily tagged me all the way down and back to Harrison as I rode my bike on The Trail of the Coeur d'Alenes today. It was surreal. 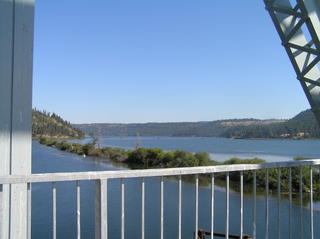 embarrassed me on another day. The dragonflies few two feet ahead, buzzing over and under and around me and laughing and talking with each other as they passed me off when I entered a new grid on the trail-- my own personal air traffic controllers on a road to a summertime Jerusalem. The pine trees, my lifelong friends, stood tall and gave a gracious nod as I passed and I, in turn, was deeply humbled once again by my family's personal legacy to me. The grasshoppers littered my path, just to remind me that distractions can sometimes come in the most seductive of forms.

Was it all real? Were these things of this world? Was there a message beyond life is so beautiful somedays it's puzzling?

I may never know for sure what today 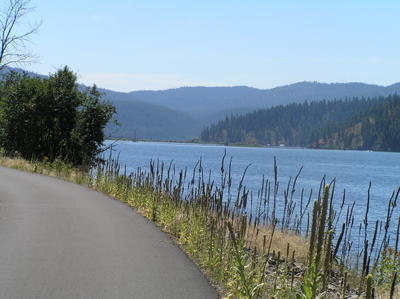 was really about or who was calling to me but I clearly heard them in the shimmer of the water, the shadow of the trees, and the billion hues of blues and greens. I am rich, rich, rich. 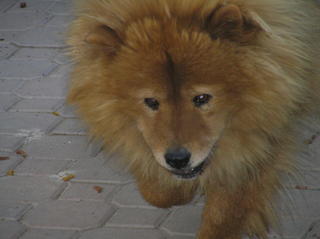 This week my friend Michael emailed from Pasadena "Tonight I saw, on the television news, the evacuation of flood victims by bus from New Orleans. People could board but not pets; as one of the buses was about to depart, a small dog that had to be left behind pawed pathetically at the door of the bus that his owners were about to leave on. It was not a good thing for me to see. With that, the magnitude of the tragedy struck full-on and my heart broke-- for New Orleans, for her people, and yes, for all the small dogs who had to be left behind. I would die in that wasted city before I would leave my dogs. Life writes the harshest tragedies."

I cannot bear to witness the anguish and suffering of the people of New Orleans much longer; 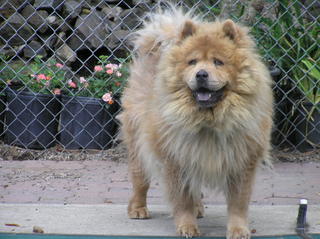 my friend Grace stood in my doorway this week talking about the little boy on the news who got his dog taken away and began to cry so badly he vomited. Her observation was that his entire life except for this raggedy dog had been taken away and then that, too, was yanked out from under him. The suffering is pointed and prolonged while meanwhile we here in The 'Kan live in the fifth-safest city in the country and wonder if we should go out for frozen yogurt tonight or just finish the rest of the movie on the DVD with a popsicle from the freezer.

Sylvie Ruth came to me often today and put her soft fur under my fingers. Right at dusk, she came again and looked into my eyes and wagged. Softly she said, "You know, Grandma, this will happen from time to time. And onetime, maybe soon, it will happen to us. We can't kid ourselves. But in the meantime, we can take a walk, how about right now? 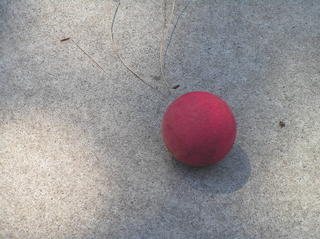 and tonight play a little longer before we settle down for bed and have an extra bone before bed while we're at it. And just maybe, somehow, when our troubles settle in, we can remember the good times and each other and who knows Grandma? maybe that will help." And so we headed for Manito Park, all together, and as the starlight flickered on, we could see that being good to each other under any circumstance is a consolation even more velvet than a September evening sky.


~for Louisiana and her people